The baths of Gruyère in Charmey is a wonderfully relaxing hot mineral water pool complex with saunas, steam rooms, and day spa treatments. 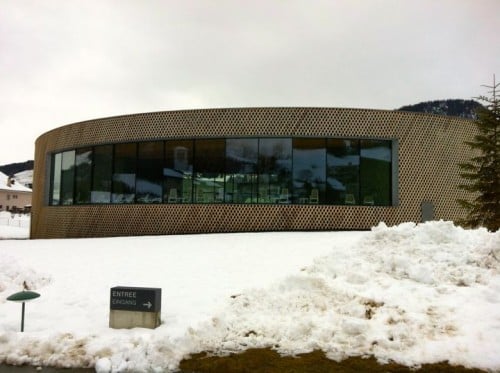 Les Bains de la Gruyère is a modern day-spa complex in the small town Charmey in the Swiss Alps of canton Fribourg / Freiburg. The complex is very modern with an interesting circular design allowing for 360° views from many of its pools.

The spa in Gruyère has two main pools: a large indoors and a larger outdoor pool. Both are open year round with water temperatures around 34°C. Both pools have numerous jet streams, shower jets, Jacuzzis, waterfalls, and similar features common to mineral baths.

The hamman area is a quiet area where noise, including talking, is not allowed. The three steam baths here are of different temperatures and humidity. Children under ten are not allowed in and even older children are rarely seen here, as admission requires a surcharge of CHF 3 per child.

The sauna zone has a nude, bio, and Finnish sauna with a cold revitalizing dunk pool. Children under 16 are not allowed in the saunas. The nude sauna is the only part of the day spa that is textile free.

A special shallow play pool for children is separated by double-glazed glass from the other spa areas. However, note that the minimum age for the pools is four years.

Massages, beauty treatments and day-spa options can be reserved in advance. The wellness area is also not open to children.

Book Tours to Gruyeres at GetYourGuide. 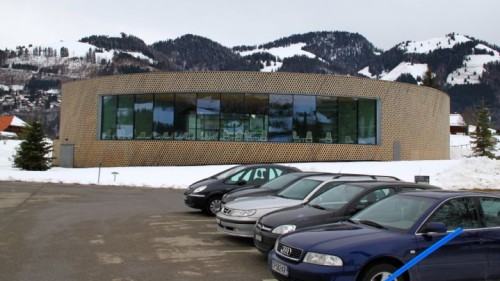 Opening hours of Les Bains de la Gruyère are long with the baths open year round, including on public holidays. The spa is open on Christmas and New Year’s Day but with reduced hours.

The hot water baths of Gruyère open daily at 9 am and close at 20:00 on Sunday, 22:00 on Friday and Saturday, and 21:00 on Monday to Thursday. Last admissions are an hour before closing.

Basic admissions – which include access to all pools, steam rooms, and saunas for adults – are CHF 26 for three hours and CHF 37 for five hours. Children 4 to 16 in company of an adult pay CHF 14 or CHF 26. Children over 10 may enter the steam baths (+ CHF 3) but not the saunas. Family rates are slightly cheaper than individual tickets.

Special deals are often available, e.g. savings for entry into the baths and the Maison Cailler chocolate factory or “ski & bains” packages combining ski lift and hot pools admission on the same day. (As a result, the baths are much quieter in the morning and early afternoons on winter days.)

The onsite cafeteria serves fairly basic but surprisingly tasty meals and drinks. Several further restaurants are nearby with the rather posh Hotel Cailler across the road from the main entrance to the baths the best option.

Getting to the spa baths of Gruyère is easiest by car. From Gruyères and Broc, it is an easy ten minutes’ drive into the mountains to Charmey, where the mineral baths are at Gros Plan 30 in the center of town. The route is well signposted but on a cool day simply look out for the rising steam. Ample free parking is available right next to the day-spa complex. Driving times are around an hour from either Lausanne or Bern.

The mineral baths can also by reached by bus. Bus stop Charmey-Corbettaz is a few minutes walk from the spa. The bus from here takes around 15 minutes to Broc station and just less than half an hour to Bulle train station, from where railway options are available to all parts of Switzerland. A few times per day a bus also goes to Fribourg station in 45 minutes. Traveling time by train and bus is around 90 minutes from Lausanne or Vevey and two hours from Bern and Geneva.

A visit to the spa baths of Gruyère in Charmey combines very well with other sights in the region when on a day trip from Lake Geneva or Bern. The Maison Cailler chocolate factory in Broc is just a few minutes’ drive away. Gruyères with its magnificent castle and old town and the Gruyere cheese factory are also close by.