The Maison Tavel is free cultural-history museum in the oldest house in Genève, Switzerland. It has a magnificent architects model of mid-nineteenth-century Geneva. 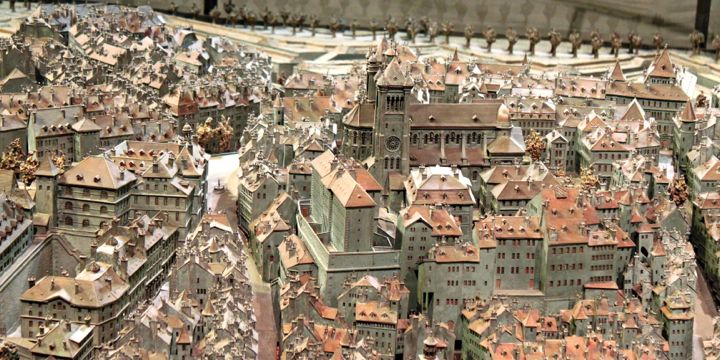 The Maison Tavel, in the heart of Geneva’s old town, is a small cultural history museum. Exhibits here covers a wide range including an amazing nineteenth-century model of Genève, bourgeoisie live in post-medieval Geneva, political developments in the region, and history explained through the minting of coins from the Roman period to the mid-nineteenth century. Admission to the permanent collection is free. 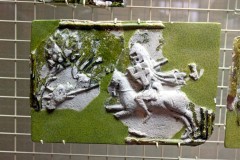 The exhibitions in the Maison Tavel is spread over five floors in an early-fourteenth century building. The building, which can be viewed in its entirety from the cellars to the roof rafters, is a particularly important example of a Swiss medieval civilian building preserved mostly in its original state. It is the oldest private house in Geneva.

The Magnin Relief Map Model of Genève in Maison Tavel

In the attic is probably the most famous exhibit in the museum – a huge architects model of Geneva in the mid-nineteenth century. It measures 7.2 by 5.65 m and weighs around 800 kg. It uses a horizontal scale of 1:250 while the vertical scale is 1:200 for the buildings and 1:100 for the terrain.

The detailed model was created during the latter part of the nineteenth century by a team led by a local architect Auguste Magnin. It shows Geneva still with its elaborate defense system in place. Ignoring the city walls, from many angles the old town seems virtually unchanged from then to now. 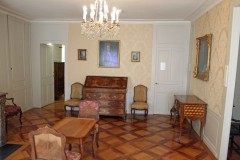 The second floor shows typical domestic scenes from posh Genevan homes from the sixteenth to nineteenth century. The twelve rooms are not particularly full but have a nice selection of elegant furniture, silverware and show some precious wallpaper. Pictures of internationally completely unknown figures and local scenery adorn the walls. A small room has a lovely set of children’s furniture and special toys.

The first floor, closed during my recent visit, has a special room of doors with fine examples of Genevan wood and metal work.

Back on the ground floor, exhibitions focus on political developments in Geneva from the sixteenth to mid-nineteenth century. Visitors without pre-knowledge of Genevan history will probably have to enjoy the individual items without necessarily understanding the bigger picture. The exhibits include medieval Savoyan helmets and the blade of the Genevan guillotine from the French Revolutionary period.

Measurements and Coins in the Maison Tavel

In the cellars are exhibitions on measuring instruments that were essential for trade conducted in Geneva through the centuries. The decimal system is a fairly latecomer. The eagle and keys emblem of Geneva is also briefly explained. 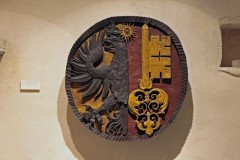 Also in the cellar is a surprisingly interesting approach to Genevan history – an explanation of Genevan history through the minting of money. A lot of small print (in French) must be read but the exhibition does a fine job of explaining the political developments from the Roman era through the Merovingian, Carolingian, Holy Roman Empire, Savoyan, Bernese liberation and Geneva Republic, French period, to Genève joining the Swiss confederation (1815).

The second cellar is used for temporary exhibitions that may be fairly unrelated to the rest of the museum and often require admission fees. 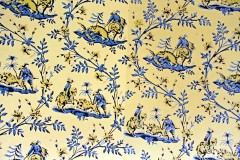 The Maison Tavel is open Tuesday to Sunday from 11 am to 6 pm. Admission to the permanent exhibition is free. Admission for temporary exhibitions is usually CHF3 – the Swiss Museum Pass is usually valid.

All descriptions in the museum are in French only – an odd habit by a city generally keen on flaunting its internationalism. A free flyer is available in many languages giving a very broad summary of what is exhibited on each floor. A fuller guide in English, German or French (CHF4) features the full translations of all descriptions following the numbering system of the museum.

The Maison Tavel is at Rue du Puits-St-Pierre 6, a block from the western façade of the Cathedral of St Pierre. (Note the plaque at no 4 – this was the first head quarters of what is now known as the International Committee of the Red Cross.)

Also worth seeing in the immediate vicinity is the Old Arsenal across the road with five cannons and three huge mosaics, the Cathedral St Pierre with lovely views from the towers, the Archaeological Site under the cathedral, and the International Reformation Museum.