Bears, lynxes, wolves, bison and Przewalski horses can be seen in the Juraparc nature park near Vallorbe and the Lac de Joux in the Swiss Jura Mountains. 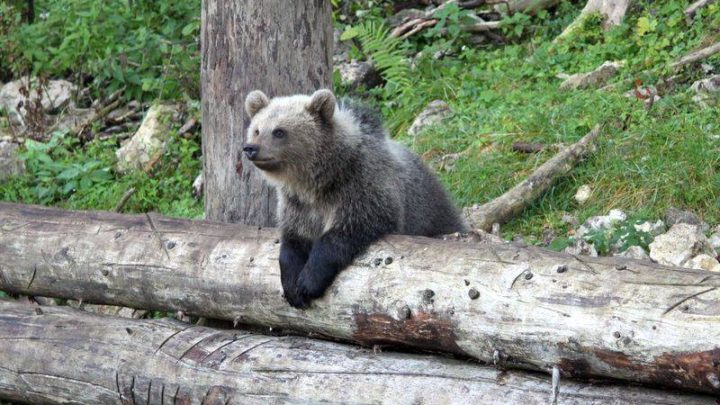 The Juraparc is a popular destination, especially for families traveling with children, in the Joux Valley. In this nature park bears, wolves, bison, Przewalski horses, and lynxes can be see in enclosures much larger than the cages seen in most zoos. The park is beautifully located in the Vallée de Joux in the Jura Mountains on the main road between Vallorbe and Le Pont on Lac de Joux. The restaurant outside the park is a popular stop for hikers, cyclists, bikers, and other travelers exploring this beautiful and fairly rural part of Switzerland.

The Juraparc Zoo in the Jura Mountains in Switzerland 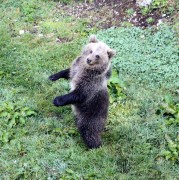 The Juraparc is beautifully located in the Joux Valley with the Jura Mountains forming a natural barrier at the back of the large animal enclosures. Visitors to the park stroll on elevated wooden walkways from where animals can safely be observed without disturbing the animals too much.

The animals here enjoy large enclosures with natural terrain, trees, rocks, and grass allowing them to scavenge for food in a natural way. The rear of many enclosures is formed by a sheer 20-m rock wall provided by the Jura Mountains.

Brown Bears and Wolves in the Juraparc near Vallorbe 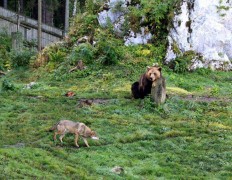 Bears are hugely popular in Switzerland and not only in Bern, which has a bear in its flag and an in-town bear park that recently replaced its historical bear pits. Children are often lured to the Juraparc with promises of bears and bears they will see in this zoo. The zoo currently has five brown bears.

In the Juraparc, some bears share huge enclosures with a pack of wolves – apparently the only zoo in Switzerland where this is the case. The animals seem to mostly ignore each other but a lone wolf generally goes out of the way of a lone bear.

The time visitors spend in the Juraparc is largely determined by the activities of the bears. They can roam freely and provide entertainment for hours but on a warm day may be lazy or in too cold weather even sleeping or hibernating.

Other Animals in the Jurparc in Switzerland 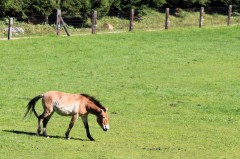 In addition to the bears and wolves the Juraparc also hosts a small herd of American bison that roam in the biggest enclosure of the park. (Bison is also on the menu of the restaurant.)

The Juraparc is home to six Przewalski horses. These primitive-looking, endangered wild-horse species was first discovered only at the end of the nineteenth century in the Gobi desert.

The zoo also has an enclosure for lynxes but these beautiful cats are hard to spot at the best of times and in this natural surroundings disappointingly rarely seen by visitors.

Visiting the Juraparc near Vallorbe, Switzerland

The Juraparc in the Joux Valley is open 365 days a year. The park opens at 9 am and usually closes at dark or 6 pm. On Friday and Saturday it is often open after 6 pm if darkness falls later.

Admission tickets to the Juraparc are CHF6 for adults and CHF4.50 for children between 6 and 16; younger children enter free.

The park is hugely popular with families with smaller children. The ramps can be accessed without stairs and are thus suitable for strollers and buggies. Some access paths are not paved, which may be problematic for some wheelchair users visiting alone.

The Chalet-Restaurant Mont d’Orzeires is at the entrance to the park and serves mostly Swiss food, which can be hearty and warming on cold winter days. During summer, a huge terrace allows families to dine al fresco while children enjoy the fenced-in play area.

Transportation to the Juraparc in the Vallée de Joux

Getting to the Juraparc by car is very easy. The park and restaurant are right next to the main road linking Vallorbe on the French-Swiss border with Le Pont on Lac de Joux. Using Autoroutes A1 and A9 via Vallorbe, the park can be reached easily within an hour from Geneva or Bern and half an hour from Lausanne.  Free parking is available. For GPS satellite navigation systems use Col du Mont d’Orzeires, 1342 Vallorbe, or simply follow the road from Vallorbe toward Le Pont – signposting to the park is clear.

The park and restaurant are also very popular with hikers and cyclists. Although this route provides probably the least mountainous access to the Lac de Joux is is still far from flat.

Public transportation to the Juraparc is not available.

A visit to the Juraparc will probably last between 30 minutes and an hour and it is thus hardly worth a day-trip on its own. However, in addition to the restaurant, the region has several sights that can easily be combined to enjoy a full day in the Vallée de Joux region.

The nearby Lac de Joux Lake is popular for water sports and swimming in summer, when the water temperature can go up to 24°C, and ice-skating in winter when the entire lake often freezes over. The area has endless hiking trails to mountaintops as well as in valleys and to the magnificent Vallorbe Caves with the source of the Orbe River. Also worth a slight detour is the lovely small town Romainmôtier with one of the oldest Romanesque churches in Switzerland.

Further away, to the north of Lausanne, the Servion Zoo and Tropiquarium is the best zoo to visit in the entire Lac Léman region.