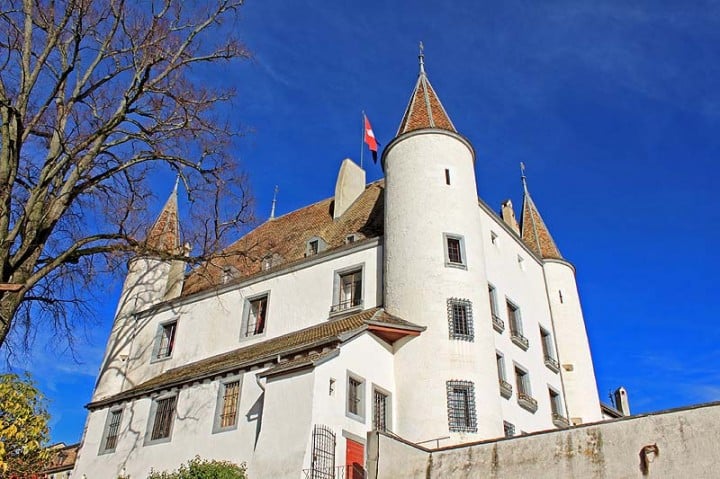 The Château de Nyon is a lovely white castle in the small town Nyon just to the north of Genève on the shores of Lake Geneva (Lac Léman) in Switzerland. Nyon Castle houses the local history museum, displays of historic and contemporary porcelain, as well as cells of the former prison. Visitors can enjoy for free the small historic courtyard as well as fantastic views of Lake Geneva, the French Alps, Mt Blanc in France, and even the Jet d’Eau water fountain in Geneva. 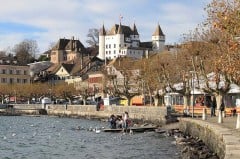 Nyon’s written history goes back to the Roman period and the times of Julius Caesar. However, despite some Roman monuments the best-known building in Nyon is its medieval castle. The foundations of the Chateau de Nyon go back to at least the twelfth century but the fortress received its present appearance mostly during the sixteenth century after the Bernese took over the region from the House of Savoy.

In contrast to many other castles in the region such as Chillon, Morges, and Rolle, the fortress in Nyon is not directly on the water level of Lake Geneva. The Chateau de Nyon is slightly uphill allowing for grand views, even from the ground floor terrace of the lake and the French Alps on the opposite banks of Lac Léman.

Visitors can enjoy the panoramic views for free from the large terrace in front of Nyon Castle. A copper plaque points out the names of the mountain peaks in France – Mt Blanc being, of course, the most famous – as well as lakeside towns including Geneva and medieval Yvoire, a very popular day-trip destination for Lake Geneva boat cruises excursions 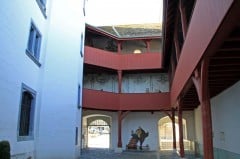 The Chateau de Nyon currently houses the local history museum and displays of porcelain. Porcelain was produced in Nyon between 1781 and 1813 and the quality was good enough for fakes to be produced in France during the late nineteenth century. In addition to historic porcelain, the museum also houses special exhibitions of contemporary porcelain. 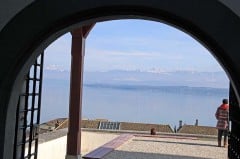 Nyon is a lovely town but it has never been of real strategic importance and this is reflected in the rather small section devoted to local history. (The Roman period is covered in the nearby Roman Museum.) Some furniture, paintings, and appliances explain Nyon’s history and the limited industry that allowed the town to expand more than many other similar fishing villages did on the shores of Lake Geneva. 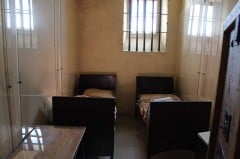 Parts of Nyon Castle was used as courthouse up to 1999 but more interesting are the prison cells at the top floor that were in used up to 1979. The graffiti on the walls, a notice that expressly forbids writing on furniture, and some prison furniture are on display.

For children, the architecture of the castle including the spiral staircase, open verandas, the roof rafters, and the prison cells will be of more interest than the displays. A few board games are available for children to play on the upper floors at the end of the formal museum. 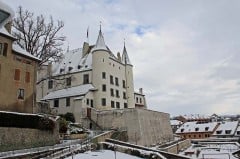 The Historic Museum with Porcelain Exhibition in the Chateau de Nyon is open Tuesday to Sunday (as well as on holiday Mondays). From November to March, the museum is open from 2 to 5 pm and from April to October from 10 am to 5 pm. The entrance is from the basement accessible by stairs or an elevator in the castle courtyard.

The courtyard and terrace with views of Lake Geneva and the French Alps are freely accessible and usually open well into the night.

Admission to the museum is CHF8 (free for under 16s), which includes admission to the Roman Museum and Musée du Léman as well. Admission is free on the first Sunday of each month. The Swiss Museum Pass is valid.

Nyon is a popular day-trip destination for tourists from Geneva or on Lac Léman pleasure cruises. Nyon is the preferred departure port for trips to medieval Yvoire, directly across the lake in France.

Another top sight in the region is the Swiss National Museum in the Château de Prangins, a short bus ride or a twenty-minute walk from Nyon.