The Dino Zoo Prehistoric Park near Besancon in Doubs, France, is a popular day-trip destination for families from Lausanne, Vaud, and Geneva in Switzerland. 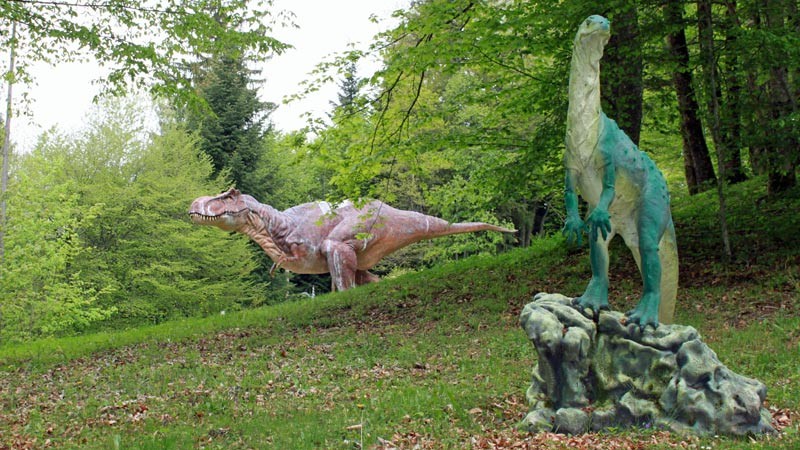 The Dino Zoo Prehistoric Park is a popular outdoor park with life-size statues of dinosaurs and prehistoric men. The Dino Zoo is hugely popular with families and a fun day-trip destination for children from Besancon or Belfort in France as well as Geneva and Lausanne in Switzerland. Close to a hundred reproductions of various kinds of dinosaurs and other prehistoric life are on display in this large landscaped park. Smaller children will enjoy the 4-D movie and a few basic rides. 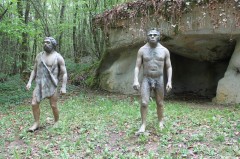 The Dino-Zoo Parc Préhistorique is a 12-hectare (40-acre) landscaped park near Besancon in the Franche-Comté region of France near the Jura Mountains and French-speaking Switzerland. The main attraction is the parcours – a 2.5-km (1.6-mile) walk through the park past around a hundred life-size reproductions of dinosaurs and other prehistoric animals as well as domestic and hunting scenes from prehistoric humans.

The first information boards explaining elements of evolution and the development of the earth are in French only. However, almost all other information boards, including the more detailed explanations of individual dinosaurs and prehistoric animals, are also in English, German, and Dutch in addition to French. 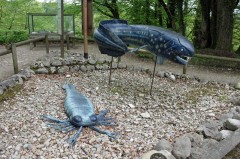 The 4-D movie (Cinéma 4D Sensitif) at the Dino Zoo Prehistoric Park is hugely popular with smaller children. Although the sound is in French only, and the 3-D movie (or projector) a bit worn, children are immensely entertained by the special 4-D effects. The 4-D cinema effects include blowing wind, water sprays, and soap bubbles.

The 4-D movie is shown only a few times per day. Confirm the screening times (Horaires du Cinéma 4D) in advance to prevent disappointment (or long waits).

A few times per day, aspects of prehistoric life are also demonstrated at the Dino Zoo. These Animations Préhistoriques include hunting techniques, lighting a fire, and prehistoric cave paintings.

The galloping dinosaur ride generally operates only in the afternoons but it is rather boring and worth missing, as the park is generally quieter in the mornings. Even without trying to study all the information boards, it is easy to spend two to three hours at the Dino Zoo and with a picnic a half-day trip is possible.

Opening Hours and Tickets for the Dino Zoo Prehistoric Park

Admission to the Dino Zoo is €10.80 for adults, €8,30 for children 3 to 12, and €9.80 for other schoolchildren and students. Small discounts are given for combination tickets with the nearby Poudrey Caves (Gouffre de Poudrey).

Transportation to the Dino Zoo Prehistoric Park near Besancon, France

Getting to the Dino Zoo is easiest by car. The Dino Zoo is located in the small village Charbonnières-les-Sapins just off the National Route N57 that connects Besancon and Pontalier. Follow the Parc Préhistoric signs from the N57. Ample free parking is available close to the park entrance.

From Switzerland, drivers from Lausanne and Genève can follow the Autobahn A1 via Vallorbe, or more scenic crossings through other Jura passes. Drivers from Switzerland may find the scenic route to the Dino Zoo via Ornans and the Loue Valley worth the slight detour from Pontalier.

The best public transportation option to the Dino Zoo is the local TER train to L’Hôpital-du-Grosbois, which is a 3-km walk from the park. Traveling time from Besancon, which has a high-speed TGV train station, is half an hour.

Besancon, the capital of the département Doubs in the région Franche-Comté in France, is the closest major town to the Dino Zoo. The UNESCO World Cultural Heritage-listed Vauban-designed Besançon citadel is also a very popular, family-friendly site with a zoo and small aquarium in addition to the historic sights.