The Muséum d’histoire naturelle in Genève covers a range of topics including animals, the solar system, the origins of man, fossils and dinosaurs, minerals, geology, and the Lake Geneva region. 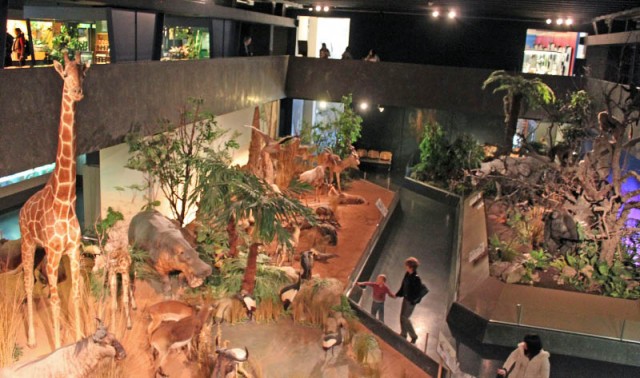 The Natural History Museum (Muséum d’histoire naturelle) is one of Geneva City’s major museums and free for all visitors. The museum’s main themes are animals, fish, birds, fossils, the development of man, minerals, the solar system, and the geology of the Lac Léman region. The museum plays an important role in the education system of Genève making visits outside school hours advisable. The museum is hugely popular with families and even the smallest children will find some displays enjoyable.

The Muséum d’histoire naturelle is the largest natural history museum in Switzerland with 10,000 m² of exhibition space in public galleries spread over five floors. Displays are mostly traditional and fairly academic but lining up objects behind glass does allow for a phenomenal number of items to be displayed in the space available. Several large dioramas allow objects to be placed in more natural surroundings.

Regional fauna is exhibited on the ground floor and include 28 species of amphibians or reptiles, 88 mammals, and 193 birds. A star attraction is the live two-headed turtle Janus born on September 3, 1997 at the museum. At the back of the hall is a display of precious stones from the Pamela Scherek Collection.

The collection of exotic fauna, i.e. any animals not generally found in Switzerland, is spread over two floors. The stuffed animals here range from an African rhinoceros to polar bears. A huge number of birds are also on display, as are fish, reptiles, amphibians, and a new display on invertebrates.

The top floor is dedicated to geosciences and the development of man. Themes include the solar system, fossils, dinosaurs, and minerals. Large sections explain the geology of Switzerland in general and the Lake Geneva region in particular. The development of man section has a bronze life-size statue of the Lucy (a fossilized hominid of the species Australopithecus afarensis) allowing visitors to compare sizes.

How big is Lake Geneva? According to the museum, if all the people in the world get into the lake, the water level will rise by less than 50 cm. (Oddly, the museum has not updated the calculations and uses a world population figure of only 4 billion.) The natural curvature of the world makes it impossible to stand on the quays of Lausanne-Ouchy and see the quays of Evian on the opposite side of the lake. (The Léman Museum in Nyon has more on the geography and life around Europe’s largest lake.)

The permanent collection is enhanced by frequent temporary exhibitions on a wide range of topics.

The Muséum d’histoire naturelle is open Tuesday to Sunday from 10 am to 5 pm. Admission is free.

The Natural History Museum sees around 270,000 visitors per year. Geneva primary school children seem to visit the museum almost annually. Due to school hours in Geneva, school groups often line up before opening time, in order to be back at school by 11:30. On weekdays, visiting during school lunch (11:30 am to 1:30 pm) and after 3:30 pm is generally much quieter than especially early morning.

Descriptions in the museum are in French only – ask at reception for an English or German pamphlet if necessary. The sign explaining that the rhino’s horn has been replaced by a plastic copy is about the only English used inside the museum.

Parking is, like anywhere else in Geneva, fairly problematic and mostly blue zone or parking meters. The Villereuse parking garage is downhill from the museum.