Les Grottes de Vallorbe on the French-Swiss border is a cave complex with magnificent stalagmites, stalactites, fistulas, and the Orbe underground river. 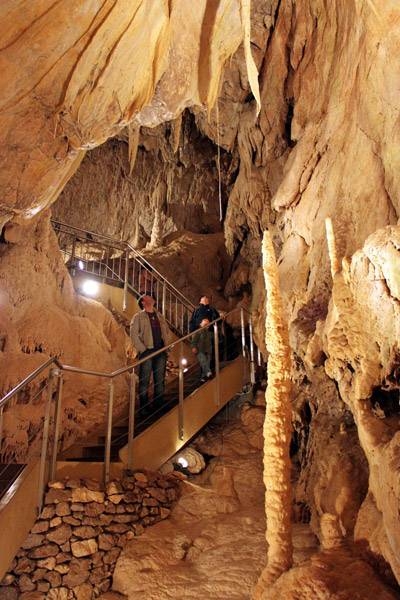 The Vallorbe Caves (Les Grottes de Vallorbe) features magnificent rock formations and the largest underground river in Central Europe. The Orbe River flows through the cave with its source directly adjacent to the cave entrance. The stalagmites, stalactites, fistulas, and other natural rock formations in the Vallorbe Caves are considered to be among the most beautiful in the Jura Mountains. The cave complex is open to visitors and is a very popular day-trip destination for travelers from Genève, Bern, Lausanne, and Besancon.

The cave complex is in a typical Karst topography and was formed during the last 7 million years or so.

The Orbe River, which drains the Joux and Benet lakes, flows as the largest observable underground river in Central Europe through the cave before finally spewing out into the open air next to the artificial entrance to the caves. The water flow of the Orbe River here at its source ranges from 3 to 80 cubic meters per second.

The caves in Vallorbe have magnificent natural attractions – due in a large part to the high calcium carbonate content in the water. The stalagmites and stalactites are considered to be amongst the most beautiful of the thousands of caves in the Jura Mountains. Some natural formations resemble sculptures of cauliflower, grapes, a bison, and even a Buddha.

The large number of hollow fistulas is particularly interesting. These naturally formed pipes, commonly referred to as drinking straws, grow at a rate of only 2 cm per century. Some of these fistulas in Vallorbe are up to 4 m long – the longest in Switzerland.

Exploring the Vallorbe Cave Complex in the Jura Mountains

The Vallorbe cave complex has been opened to casual visitors since 1974 – previously it was necessary to dive through the Orbe River to reach the dry cave rooms. Nowadays, visitors simply stroll in though an artificial tunnel dug next to the source of the Orbe. Visitors follow a one-way path with numerous stairways through the cave complex to see the stalagmites, stalactites, straws, pillars, and other geological features.

The caves are well lit with automatic lights while further manual light switches allow interesting features to be lit individually. Fortunately, there is no music, colored lights, or corny commentary. In the largest hall, where metal pavements and stairways take visitors high above the Orbe, the river noise would drown out any commentary anyway.

At the exit in Le Trésor des Fées (treasury of the fairies) is an exhibition of around 250 large minerals and crystal from all over the world.