Les Grottes de Vallorbe is a beautiful cave complex and a top family-friendly day-trip destination from Lake Geneva, Lausanne, and Bern in Switzerland. 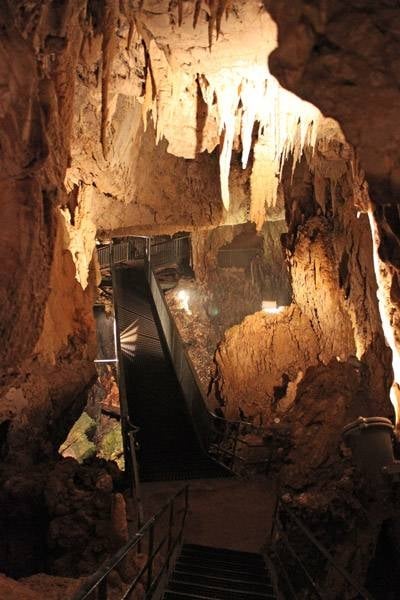 The Vallorbe Caves (Les Grottes de Vallorbe) is a popular day-trip destination in the Jura Mountains on the Swiss-French border. The Orbe River flows through these caves allowing visitors to see the largest underground river in Central Europe. A large collection of minerals and crystals from around the world is on display in addition to magnificent natural stalactites and stalagmites in the caves. The cave complex may be seen without a tour and are very popular with children and families. Vallorbe is an easy hour’s drive on the autobahn from Genève or Bern and only half an hour from Lausanne and Lake Geneva

The entrance to the Vallorbe Caves is an easy ten-minute hike through the forested and beautiful Orbe valley on a well maintained but unpaved path from a large parking lot. The source of the Orbe River can be seen just prior to the cave entry and the ticket barriers.

The cave complex of Vallorbe is seen along a set one-way route and usually without a guided tour. An information sheet is available but most information is in French only. A few explanations inside the cave are in English and German. However, even non-French speakers can easily enjoy the sights – around 30 numbered posts indicate where it worth stopping to admire the best stalagmites, stalactites, columns, and other rock formations.

The Vallorbe Caves are not accessible to wheelchair users or strollers. Seeing the caves involves quite a large number of stairways but the caves are never very narrow or claustrophobic.

It is possible to rush through the caves in around 40 minutes but even visitors with very limited interests in the finer aspects of the geological marvels on view will easily spend more than an hour inside the caves and the mineral display at the exit.

The Vallorbe Caves are open daily from April to October from 9:30 am. The last entry into the caves is at 4:30 pm (5:30 pm in June, July, and August). In March and November, the caves are open on weekends from 1:30 to 4 pm. The exact opening and closing day of the season may be adapted according to public holidays and the local school calendar – phone (tel 021 843 22 74) to confirm.

Admission is CHF15 for adults and CHF7 for children aged 6 to 16. Children under 6 enter free but taking small children inside the caves may be more hassle and worry than it is worth.

The temperature inside the cave is a chilly 10° C year round with very high humidity due to the underground river. Due to the physical exercise needing to stroll through the caves and scaling the stairways even a light jacket is sufficient cover for most visitors.

Getting to the Vallorbe Caves in Switzerland

The Vallorbe Caves (Les Grottes de Vallorbe) is a top day-trip destination and within an hour’s drive from Geneva, Bern, Lausanne, and Besancon (France). From Swiss cities, use the Autoroute A1 with a turn-off towards Vallorbe just south of Yverdon les Bains. From Besancon and the Franche-Comté region, follow directions towards Lausanne or Vallorbe.

From Vallorbe, which is right on the Swiss-French border, use the main road towards the Vallée de Joux. Just before leaving Vallorbe town, brown “Les Grottes de Vallorbe” signposts indicated the turn off onto a very narrow road leading to a large, free parking lot. From here, follow the path on the right bank of the Orbe River upstream for a short hike to the cave entrance.

The caves are on popular hiking routes. Hiking from Vallorbe train station should take around 40 minutes with further trails going deeper into the Jura Mountains.

The caves are a very popular attraction for families and fun to visit with children – it is mostly hiking and climbing and very little formal exhibition displays.

Visiting the Vallorbe Caves combines very well with other attractions in the region including the nearby Juraparc, endless hiking trails, and water-sport adventures on the lakes in the Vallée de Joux. It is also a pleasant stop when traveling to the Dino Zoo or Besancon in the Franche-Comté region of France.