Getting to Lac de Joux Lake in the Jura Mountains in Switzerland is easy by car or train. Even in winter many Jura passes remain open while hourly trains arrive from Vallorbe.

Lac de Joux is the largest lake in the Jura mountain range in Switzerland and France. The lake is a popular destination throughout the year with swimming and other water sports activities popular during summer and ice-skating possible during winter. Several small ski and winter sport resorts are in the Jura Mountains next to the lake. Getting to the Joux Lake is easy by car while trains provide the best public transportation option. Paris is a quick TGV train-ride away.

The road on the southern shores of Lac de Joux is closest to the lake while the railway line goes along the northern shores, where the road often is more inland. The southern shore road is mostly flat and great for cycling with hiking trails right on the lake.

Lac de Joux is in the Joux Valley in the Jura Mountains near Lake Geneva. The lake is at an altitude of 1,004 m, meaning some passes have to be cleared to reach the lake from the Lac Léman region and the rest of Switzerland but these present little difficulties, even during most of winter.

Lac de Joux can be approached on various different routes. The easiest car access, and the road most likely to be cleared during snowy weather, is via Vallorbe. The highest point on this road is only 1,060 m.

Alternative routes go through Jura passes such as Col du Mollendruz (1,180) and Col du Marchairuz (1,447 m). These passes are not as well sign posted and are quicker to close during snowfalls. Even when open, especially Marchairuz, may still require snow tires. In warmer weather, these roads are easy enough to drive but Marchairuz is narrower and go through more isolated areas. Both passes give beautiful view, especially on clear days when driving back to Lake Geneva.

An alternative when driving from Geneva is to go through France and enter the Joux Valley from Les Rousses / La Cure. In this case, go up the Jura at either Col de la Faucille or via Nyon and St Cergue.

Driving distances and times in good weather to Le Pont on Lac de Joux in Vaud are around:

In winter, the longer route via Vallorbe is almost always the fastest as it uses Autoroute A1 with the last 15 km to Vallorbe along a very well maintained national road.

By Train to Lac de Joux in Switzerland

Lac de Joux can also easily be reached by train from most parts of Switzerland, as well as by TGV from Paris. In the Vallée du Joux, an hourly train connects Les Brassus and Vallorbe, which historically has been an important railway hub. However, most travelers arriving on trains from Switzerland should change at Le Day.

Train traveling times from Vallorbe are:

Traveling from Geneva to Le Pont on Lac de Joux takes around 1h30 – change to the S2 in Renens VD, and then again in Le Day.

A few times per day the Paris-Gare de Lyon to Lausanne TGV-Lyria trains call in Vallorbe. These trains allow visitors from Paris to reach Le Pont on Lac de Joux in a mere 3h30 and less than two hours from Dijon.

Bus services are available on the southern shore of the lake with Le Pont once again a good departure point. These buses commonly run once per hour but less frequent on weekends and especially on Sunday and vacation days.

Train and bus schedules are best checked in advance at the Swiss Railways website, which also allows for the purchase of online tickets for most train and bus services in Switzerland. 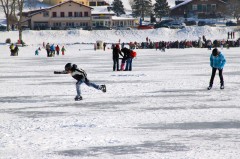 For More on the Lac de Joux Region See Also: