Lake Joux freezes over most winters to become a huge free open-air ice-skating rink enjoyed by locals and tourists alike. Transportation is easy by car or train from most parts of Switzerland. 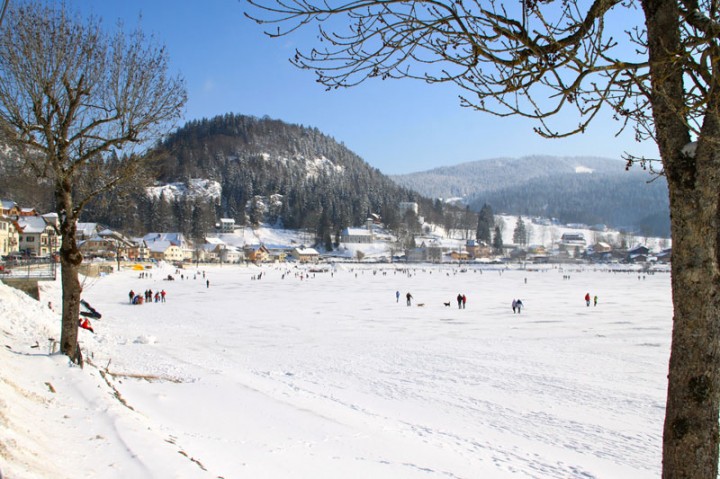 In winter, when the Lac de Joux freezes over, the lake becomes the biggest free ice-skating rink in Europe. Skates can be hired at the lake while it is also easy to walk on the ice with regular shoes. On weekends, food and warming drinks are sold on the ice. Located in the Jura Mountains, Lac de Joux is easily accessible by car or train from the Lake Geneva region and most parts of Switzerland. 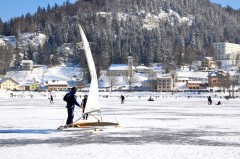 The Lac de Joux in Canton Vaud is the largest lake in the Jura mountain range that forms Switzerland’s northwestern border with France. When full, the lake is just shy of 10 km long and on average around a kilometer wide.

At an altitude of 1,004 m and a maximum depth of only 32 m, Lac de Joux quickly responds to changes in climate. In summer, it is quick to heat up reaching around 24°C. More spectacularly, and in contrast to the larger lakes in the region, Lac de Joux completely freezes over. 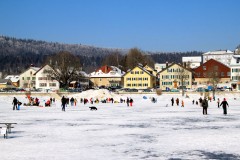 Most winters, Lac de Joux freezes over sufficiently for the whole lake to be transformed into the largest free open-air ice-skating rink in Europe (or the world, depending on who is telling the story). Parts of the lake, especially near Le Pont, may freeze sufficiently for walking and ice-skating as early as late December or early January. The whole lake is usually frozen by February and depending on the weather may stay that way for around two months.

Once the whole lake is frozen over, skaters may enter the lake at any available access point. Le Pont is a popular access point as it is close to the train station and skates can be rented here on weekends.

Drivers with their own skates may do well to try and avoid Le Pont on weekends when the town becomes jam-packed with cars – not only is parking hard to find but it can be tortuously slow to drive through Le Pont to reach other parts of the lake.

Skate Rental and Food on the Frozen Lac de Joux 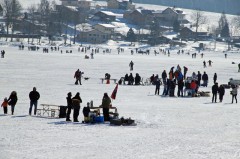 Many, if not most, visitors arrive with their own skates at Lac de Joux but skate rental is possible at the lake itself. On weekends, skate rentals are available on the lake at the bridge near the train station in Le Pont. On weekdays only, skates can be rented from Cordonnerie Mouquin in Le Sentier, tel: 021-845-5404.

As the season is short, the number of skates available is limited and it may be prudent to arrive early.

Food and drink are available from numerous cafés and restaurants near the lake. However, on weekends, impromptu stalls are often set up on the frozen lake itself to sell warming drinks such as coffee, tea, mulled wine, and soup.

On busy weekends, up to around 5,000 skaters may take to the lake, Although the lake is big enough to never feel crowded, the access roads in the region becomes very slow.

Many towns in the Lac Léman region have ice-skating rinks open to the public during winter. Skating is even free on some such as in Gland and the lakeside rink in Nyon. However, these rinks are often reserved for school-use only on weekdays. No such restrictions are in place on Lake Joux.

Getting to Lac de Joux is easy by train or car from most parts of Switzerland.

Other sights in the region worth exploring include hiking up to several Jura peaks (some can almost be reached by car in summer), the JuraParc on the road to Vallorbe, several museums and the beautiful caves in Vallorbe, and Romainmotier, which has one of the oldest Romanesque-Gothic churches in Switzerland.