The Château d’Yverdon castle houses an interesting local history museum with exhibits from the Neolithic to present era including menhirs, Roman barges, and medieval treasures. 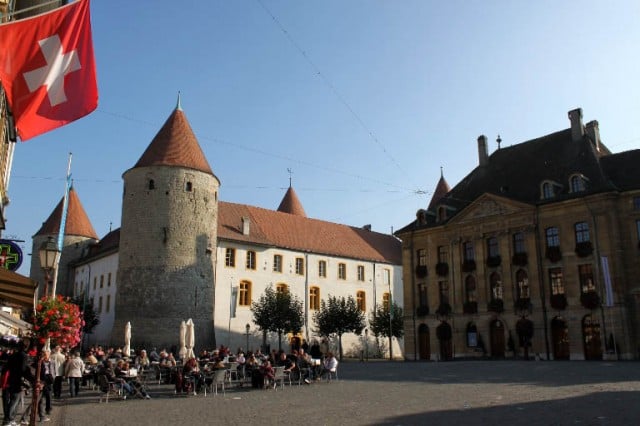 The Yverdon-les-Bains region at the far southwestern corner of Lac de Neuchâtel in Western Switzerland has been continuously inhabited by humans for the past 6,000 years. Not surprisingly therefore, the local history museum (Musée d’Yverdon et Région) housed in the thirteenth century castle has a wealth of stories to tell and many treasures to show. The museum is family friendly with many models and interesting towers to explore. Yverdon-les-Bains is a very pleasant town and a great day-trip destination from Geneva, Lausanne and Bern.

The Château d’Yverdon Castle and Museum

The Musée d’Yverdon et Région is a regional history museum housed in Yverdon Castle. The Château d’Yverdon dates from the thirteenth century and despite alterations maintains the appearance of a typical Savoyan castle with a square courtyard and round towers in the corners.

The level of Lac de Neuchâtel was artificially lowered at the end of the nineteenth century. This led to the discovery of many archaeological finds and also explains why the castle is so far from the lake.

The local history museum in Château d’Yverdon is spread over several floors. The entrance is on the ground floor, which a few centuries later is now a bit higher than street level. The descriptions in the museum are generally in French only but visitors receive a free guide with general descriptions and a map to guide them through the museum. Audio guides are also available in many languages.

On the ground floor are three rooms with original wall and ceiling paintings from the Bernese period (1536-1798). In these rooms the emphasis is on the history of the castle itself.

One level up, the main floor covers the pre-history to the present. Humans have lived in the Yverdon region since around 4,000 BC with the first room having exhibits from the Neolithic and Bronze Age such as pots, metal work, jewelry, and an 11-m pirogue (dug-out canoe).

“From the Celts to the Burgundians” is probably the most interesting hall in the museum. Yverdon (Eburodunum) was an important settlement during the Roman era with a very large castrum and naval base built here during the fourth century to defend Roman lands against the Germanic invaders. The hall has many of the items typical from the period but specifically note the Celtic wooden statue from around AD 50 – it is one of only three from this period ever found in Switzerland and the best preserved of the three. (The other two were found at Villeneuve and Geneva on Lac Léman.)

Further rooms deal with the post-medieval period, the Vaud revolution, and the industrialization of the region in the nineteenth and twentieth centuries. A special room is dedicated to Johann Heinrich Pestalozzi, who revolutionized education in Switzerland at the start of the nineteenth century – many Swiss cities have a street or square named after him.

Some of the exhibits are in the round towers. It is possible to climb very narrow, steep stairs in the donjon for marvelous views of Yverdon.

As with so many other local history museums, the Yverdon museum also has its collections of oddities. Some local collectors donated interesting Egyptian antiquities, including a sarcophagus with x-rays of the mummy. The museum also has 25 late-eighteen-century Amerindian items, which are considered amongst the oldest in Switzerland. How the items came to Yverdon remains a mystery. (Only a few of these ethnography items are on display.)

Gallo-Roman Boats in the Cellars of Yverdon Castle

It would be easy, and a shame, to miss the Gallo-Roman boats exhibited in the cellars of Yverdon castle. The main exhibits here are two Gallo-Roman boats found in Yverdon only at the end of the twentieth century.

The 10-m open boat, found in Yverdon in 1984, dates from the fourth century, and is the only example ever found of a boat from the intermediate stage of boat  building (between dug out and joining planks together).

The 20-m barge was found during road works in 1971 – about half of the original vessel survived and road-building equipment drove straight through that bit too. It was used to transport heavy items such as building materials on Lake Neuchatel.

The Savoyans reused building material from the Roman castrum when building the chateau in the thirteenth century. In the archway linking the two boat exhibitions is a clear example of a decorated stone from the Roman period.

Getting to the Gallo-Roman boats in Yverdon Castle is a bit tricky. Currently, follow the stairs down from the emergency exit – the door is marked “Roman Boats” but it is a few flights of stairs down – between the Neolithic and Celtic rooms in the same room where a second door gives access to the donjon. It is a good idea to finish the main floor first and see the boats last. Alternatively, exit the museum normally and enter the cellars from the outside of the castle at the west tower.

The Musée d’Yverdon et Région in the Chateau is open year round Tuesday to Sunday, including holiday Mondays but always closed on December 25 and January 1. From October to May, the museum is open from 2 to 5 pm and from June to September from 11 am to 5 pm.

Admission is CHF8 for adults and CHF4 for children over 6. Combination tickets with the Maison d’Ailleurs are available. The Swiss Museum Pass is valid.

Visiting the Musée d’Yverdon et Région combines well with seeing the Menhirs (open air) in Yverdon-les-Bains and the nearby Château de Grandson fortress. The large Laténium near Neuchâtel city has further archaeological finds from the region. Water sports activities are possible on the lake while the waters are always hot at the Yverdon-les-Bains spa.