Château de Grandson in Vaud on Lac de Neuchâtel is the second largest castle in Switzerland and its historical importance is forever engraved in the psyche of the Swiss.

Switzerland’s second largest castle – Château de Grandson on Lake Neuchatel – is a fun day-trip destination for visitors of all ages including families with children. The old castle played a major role in Swiss history. It now houses a local history museum that is open year round allowing visitors to see some historic displays while roaming large parts of the castle including the cellars and sentries’ walk high up on the outer walls. The automobile museum in the cellars has an impressive collection of vintage cars dating back to the nineteenth and early twentieth centuries.

The Role of Château de Grandson in the History of Switzerland

In contrast to many towns in the region, Grandson was not inhabited during the Roman era or early Middle Ages. Grandson was first mentioned in 993 but the castle is only known from the late 11th century. It has been rebuilt many times through the centuries but maintained the typical Savoyan square / rectangular courtyard with round towers.

Grandson has a very prominent position in Swiss history. During the Burgundian Wars, the Swiss allied with the Austrian Habsburgs against the Duke of Burgundy. In 1475, the Swiss occupied the Castle of Grandson, which was the property of Jacques of Savoy, an ally of Charles the Bold, duke of Burgundy, who at this stage of history was almost equal in strength to the French king.

In February 1476, Charles the Bold recaptured the Castle of Grandson and executed the Swiss garrison. (All Swiss sources claim the garrison of 400 only surrendered after Charles promised mercy.) Enraged, the Swiss united and attacked the forces of Charles the Bold. The Burgundian fought badly at the Battle of Grandson on March 2, 1476. Despite a surprisingly low number of casualties on either side, the Burgundian fled, leaving behind artillery and the huge Burgundian treasure.

The Swiss failed to follow up the significant victory and allowed Charles the Bold to regroup. He tried to avenge his defeat but a few months later was again humiliated by the Swiss at the even more famous Battle of Murten (Morat) on June 22, 1476. His loss here led to the permanent decline of Burgundy, weakened the hold of Savoy over western Switzerland, and led to the eventual occupation of Vaud and much of French-speaking Switzerland by the Bernese.

The Castle of Grandson now houses a local history museum with an eclectic collection of anything related to the region. Descriptions are in French and German only but visitors receive a small English pamphlet to guide them through the maze of rooms open to the public. Follow the arrows and try all closed doors for the best experience.

Given Grandson’s role in medieval Swiss history, many items focus on the Battle of Grandson. Arms, weaponry, and other items related to Duke Charles the Bold of Burgundy are prominently displayed. The Swiss soldiers were largely unaware of the value of the fabulous treasure they had captured from the Duke of Burgundy and very little remained in Swiss hands. Note the copies of the duke’s ceremonial hat and his campaign tent. A large collection of swords, old pistols, coats of armor, and crossbows are displayed in the museum. 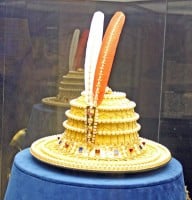 A 20-minute diaporama video (in English, French, or German – press the button at the rear of the room) explains the battles of Grandson and Morat. However, the history of the Burgundian wars is complicated at best and many visitors may struggle to keep up with the details of alliances and battles won / lost. A bit of reading before visiting Grandson will help to enhance the experience – Wikipedia has decent explanations of the Burgundian Wars, Charles the Bold, the Battle of Grandson, and the Battle of Murten.

Apart from displays related to military history, the museum has items typical of museums in the region – the odd pieces of furniture and art, local industry, and archaeological items found locally from the Neolithic, Bronze, and Iron Ages. The torture chamber has an original wheel and axe used for local executions.

The cellars of Chateau de Grandson house a very pleasant surprise in the form of a small vintage car museum. The more than twenty cars on display range from a Delahaye (1898) to a 1927 Rolls Royce Phantom previously owned by Greta Garbo.

Displayed next to the vintage cars are models in typical period dress, bicycles, and items related to motoring in the early twentieth century. Of particular note are the very rare pre-First World War cars.

From the basement, visitors can climb the 111 stairs to the top of the Adalbert Tower for a 135-m long walk on the sentries’ walk. The covered walkway runs along three sides of the castle and offer grand views of the Jura Mountains, castle courtyard, Grandson town, and Lake Neuchatel.

The Chateau de Grandson Castle is open year round from 08:15 am to 5 pm (6 pm from April to October). The castle and museum are only closed on December 25 and January 1.

Admission is CHF12 for adults, CHF5 for children 7 to 16, and CHF28 for families. The Swiss Museum Pass is valid. Discount combination museum and bus tickets are currently available – see below.

The Castle of Grandson is still very much in its medieval state with many steep stairs and uneven walkways. The castle is not suitable at all to wheelchair users or parents with strollers / buggies. However, it is fun for smaller children to explore the medieval layout of the castle.

Visiting Château de Grandson takes at least an hour and it is easy to spend two hours here without going into excessive details.

Transportation to Grandson on Lake Neuchatel

Grandson in Vaud is located on the southwestern end of Lake Neuchatel, is only 5 km north of Yverdon-les-Bains on the lakeside road. Free parking is available at the Château with further blue-zone and parking meter spaces available in town. If driving, leave the Autoroute A5 at Yverdon-les-Bains. Driving times are around 30 min (45 km) from Lausanne, 50 min (90 km) from Geneva Airport, and an hour (85 km) from Bern.

Although the train line passes right next to the castle, trains rarely stop at Grandson and usually outside the opening hours of the castle (except late afternoon in the direction of Yverdon).  Instead, change to the yellow postal buses at Yverdon-les-Bains. Yverdon has very good Inter-City train connections to all parts of Switzerland, including Neuchatel (17 min), Lausanne (20 minutes), Geneva Airport (an hour), and Bern (an hour, including train change in Neuchâtel).

From Yverdon-les-Bains Gare, the at least hourly CarPostal yellow bus takes only around 15 minutes to Grandson, stop Place du Château.

Ask the bus driver / ticket office for a Forfait CarPostal et Château de Grandson offer, which gives a 25% discount on the castle admission to adults and free entry to those under 16 when buying a bus ticket to Grandson, place du Château.

Grandson is a stop on the Lake Neuchatel boats from and to Yverdon. Traveling time from Yverdon-les-Bains by boat to Grandson takes 15 minutes. Alternatively, it is an hour’s walk (5 km) along a pleasant route from Yverdon to Grandson.

Visiting Grandson on a day trip from the Lac Léman region or Bern combines well with stops in nearby Yverdon-les-Bains (hot spas, menhirs, and chateau) or Neuchatel (and the Laténium).