The International Museum of the Reformation (Musée International de la Réforme) in Genève’s old town is a surprisingly interesting collection of items related to the past five centuries of the Christian Protestant church reformation. 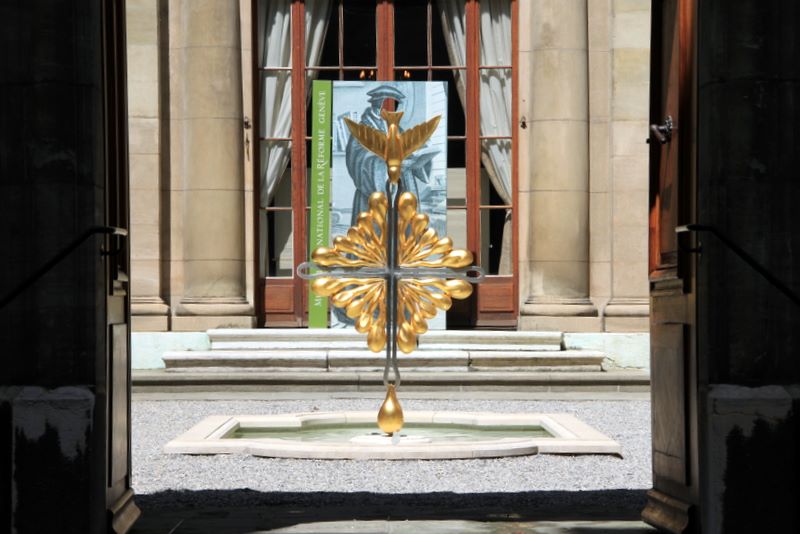 The International Museum of the Reformation (Musée International de la Réforme) is located in the historic Maison Mallet in the morning shade of Geneva’s St Pierre Cathedral. The museum covers the full spectrum of developments in the Protestant Reformation from the early sixteenth century to the present. Although not ignored, surprisingly little in the museum is directly linked to local Reformation leader John Calvin. The exhibition and presentation is surprisingly interesting and even non-believers will be able to enjoy the museum. Although a few items are aimed at children, families may find it hard to enjoy the collection when accompanied by smaller children.

The Permanent Collection of the International Reformation Museum

The permanent collection of the Musée International de la Réforme is spread over two floors in thirteen rooms (clearly no space for superstition here!). Rooms are arranged according to themes and chronology. Descriptions are mostly in French only but a free audio guide explains the main themes and various exhibits in English or German. Many of the original documents are in French, German, or Dutch.

The Reformation Museum has an impressive collection of sixteenth-century Bibles and religious manuscripts in various languages. On display are also a number of propaganda pamphlets and posters with explanations on how the Protestants and Roman Catholics used similar methods and themes to attack and discredit each other.

Audio-visual presentations explain the general development of the Reformation while visitors can also enjoy the viewpoints of religious leaders debating the theory of predestination at a theological banquet.

The wars of religion in France are also extensively covered, as is the spread of the influence of the French Huguenots throughout Europe, America, and South Africa after the revocation of the Edict of Nantes.

John Calvin in the International Reformation Museum in Switzerland

Jean Calvin dominated religion, politics, and everyday life in Geneva through much of the sixteenth century. Together with Martin Luther, Calvin is arguably the most famous and most influential of all the Protestant reformers.

Only a small room in the Reformation Museum is dedicated to the life and works of John Calvin – although some of his works and influence are explained in other thematic rooms too. Very few items survived that can be traced back to the life of Calvin other than his books and ideas. Pull out a drawer to see a report in his own handwriting on a suicide. (The wooden chair used by Calvin is in the cathedral.)

The Protestant Reformation hugely influenced church music from the sixteenth century onwards. In a small room with marvelous acoustics – but suitably uncomfortable pews – visitors may select various hymns and music pieces including several psalms, Handel’s Daughter of Zion sung to French words, and Luther’s Ein feste Burg ist unser Gott. (Listening to ALL verses is compulsory before a further psalm may be selected.)

Modern Protestantism in the International Reformation Museum in Geneva 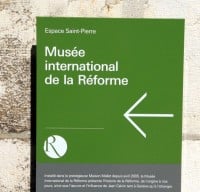 The influence of the Reformation on modern life is explained in the basement halls of the museum. Nineteenth-century Protestantism greatly influenced the development of many social institutions and charities that have become common place during the twentieth century.

The museum also has exhibits on the influence of modern Protestant leaders including Karl Barth, Dietrich Bonhoeffer, and American televangelists. Five screens broadcasting Protestant church services from five different parts of the world illustrate the diversity and versatility of modern Protestantism – Calvin would be shocked.

Visiting the International Museum of the Reformation in Genève

The International Museum of the Reformation is at 4, rue du Cloître, Genève, directly next to the St Pierre cathedral in the heart of Geneva’s old town. It is located inside the elegant eighteenth-century Maison Mallet.

The Reformation Museum is open Tuesday to Sunday from 10 am to 5 pm. Admission is a rather hefty CHF13 (CHF10 for children 7 to 16 and students up to 25) and includes the use of an audio guide. An Espace St Pierre combination ticket is CHF18 and includes admission to the museum, the archeological site under the cathedral, and access to the cathedral towers (great views on a clear day). The Swiss Museum Pass is accepted. Also worth seeing nearby is the small (free) Maison Tavel local history museum with a large relief map of Geneva in 1850.

Children may enjoy pulling open and shutting a few drawers, winding a few simply models, and the odd game but the museum is otherwise not aimed at children. Families with children may find it hard not to rush through the museum and thereby miss out on many of the explanations and finer details that make visiting this museum far more interesting than the mere subject may suggest at first glance.