The Musée National Suisse in Château de Prangins is the top museum on the history and culture of Romandie (French-speaking Switzerland). It is located on the edge of Lake Geneva near Nyon.

The Musée National Suisse in Château de Prangins is the Western Switzerland branch of the Swiss National Museum. The museum is located in the Château de Prangins, an early eighteenth-century palace located in between Nyon and Gland. The museum focuses on eighteenth and nineteenth century history with special emphasis on the French-speaking cantons of Switzerland. The museum has a large collection with exhibits ranging from coins to coaches and porcelain to furniture. Many of the items can be enjoyed by children and visitors not interested in the fine details of Swiss political history.

The Swiss National Museum (Musée National Suisse / Schweizerisches Landesmuseum) in Western Switzerland is housed in the pretty eighteenth-century palace in Prangins near Nyon on the shores of Lake Geneva. The Chateau de Prangins, completed in its present form around 1730, previously housed Voltaire and Joseph Bonaparte – the Bonaparte family still owns property nearby. The Swiss National Museum only moved into the Chateau de Prangins in 1998.

The Swiss National Museum in Prangins concentrates on the history and culture of the eighteenth and nineteenth centuries with special emphasis on developments in Romandie, or the French-speaking cantons in Western Switzerland. the Schweizerisches Landesmuseum Zürich is the larger history museum covering all of Switzerland.

Collection of the Swiss National Museum in Prangins, Switzerland

On the ground floor, the daily life of the bourgeoisie and rich is illustrated with exhibitions of furniture, musical instruments, kitchen implements, and other common household items.

One floor up, the exhibits become more serious and focus on Swiss history. The late eighteenth century and early nineteenth century saw tremendous changes in the political boundaries of this part of the world.  On the upper floor is an exhibition on the development of Switzerland’s interactions with the rest of the world.

The cellars have further exhibitions that area particularly attractive to children. The focus here is transportation and the building of the chateau.

Visiting the Gardens of the Chateau de Prangins near Nyon

The gardens of the Chateau de Prangins are mostly freely accessible. To the north of the chateau is a sunken garden. This wall-enclosed garden follows historical layouts and is planted each year with flowers, vegetables, herbs, and medicinal plants. Admission to the gardens is free.

Also for free are the views from the chateau terrace of Lake Geneva and the French Chablais Alps. To reach the terrace, use the doorway to the chateau café-restaurant and stroll past the entrance to the terrace.

Further green areas extend in all directions from the castle. The paths here are mostly shaded and great for strolling around while children may play on the grass. Picnicking is allowed. (Play areas are located across the road from the castle parking lot as well as on the lake shore behind the football fields.)

Tickets and Opening Hours of the Swiss National Museum in Prangins 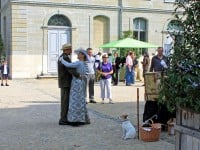 The Swiss National Museum in Château de Prangins is open year round from Tuesday to Sunday from 10 am to 5 pm. Admission is €7 for adults and free for children under 16. The castle and historical kitchen garden are accessible to wheelchair users. The Swiss Museum Pass is valid.

Transportation to Prangins in Switzerland

Getting to the Swiss National Museum is easiest by car but public transportation via Nyon is also an option. From Autoroute A1, use either the exit for Nyon or Gland and follow the brown Château de Prangins signs. Free parking is available behind the chateau in Prangins town or near the lake at the lakeside road Route Suisse.

Four trains per hour to Nyon are available from Geneva (15 minutes) and Lausanne (35 minutes). From Nyon, buses take only around five minutes to Prangins.

Alternatively, walk from Nyon along Route Suisse to Prangins. Good pavements are available on both sides of the road. The road is flat except for the short climb from the lake level to the chateau. Hiking from Nyon to Prangins should take 20 to 30 minutes.

The Swiss National Museum in Prangins is the largest and most important museum in the region. It is a national museum and thus not included in the museum combination ticket for the three museums in Nyon.

For More on Nyon near Prangins See Also: