The Olympic Museum in Lausanne has reopened and the museum boat is no longer in use.

While the IOC Olympics museum in Lausanne-Ouchy is under reconstruction, a small exhibition on a boat in Lake Geneva and the Olympic Park are open for free during summer.

→The Olympic Museum in Lausanne has reopened and the museum boat is no longer in use.

The Olympic Museum in Lausanne, Switzerland, is currently closed for reconstruction (until end 2013). However, sport lovers can visit for free a small exhibition on an historic paddle steamboat moored off the Olympic Park in Lake Geneva. Most of the Olympic Park with numerous outdoor statues and lovely views of Lac Léman can also be seen for free. The Olympic Museum boat is only open from April to October.

The Olympic Museum in Lausanne, Switzerland

The International Olympic Committee (IOC) has its permanent seat in the Swiss city Lausanne on the shores of Lake Geneva. Lausanne is therefore the natural choice for the location of an Olympic Games museum – many other related museums are scattered throughout the world. 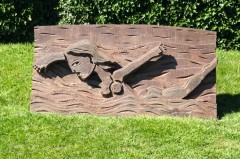 Le Musée Olympique has for the past two decades been one of the most popular tourist attractions in Lausanne. However, the museum has often been criticized for being style over substance and giving more credit to the IOC than to athletes. This, as well as the rapid development of multimedia technology in recent years, contributed to a new conception of the Olympic Museum, which is being enlarged and due to reopen by the end of 2013. 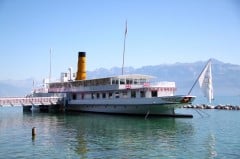 While the Olympic Museum is closed, visitors can still see Olympics-related exhibitions on an historic paddle steamboat as well as the pleasant Olympic Park.

The Olympic Museum temporary exhibition is on the 1926 paddle steamboat Helvétie, currently sans engine and thus ideal for a floating temporary museum. The exterior of the boat sports endless British flags in honor of the 2012 Games in London. 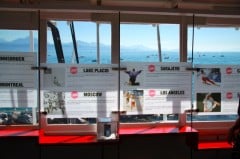 Inside, the Olympic Museum collection is spread over three decks. Various themes are covered including the highlights from all summer and winter games from 1896 to the present, copies of medals and torches from all previous games, a few items belonging to Olympic athletes, and architect models of a couple of Olympic venues. The exhibition space on the boat is limited so themes cannot really be covered in detail. 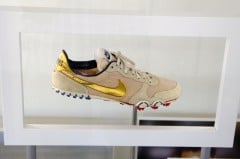 The Olympic Museum Boat steers well clear of anything mildly controversial and it will be interesting to see how several topics and issued are handled in a full museum. For example, no mention is made of the tragic events in Munich 1972 or the boycotts of Moscow in 1980 and Los Angeles in 1984. Doping and drugs are dealt with in a single sentence: “Fight against doping: for the first time, EPO screening and blood tests were carried out at the Games”.

Visit the Olympic Park in Lausanne on Lake Geneva

The Olympic Park stretches from the shores of Lake Geneva to the Olympic Museum building at the top of a hill in the Lausanne suburb Ouchy. The landscaped park has several walkways – as well as escalators – leading from the lake to the museum.

In the Olympic Parc are numerous sport-related statues and outdoor exhibitions of items related to previous Olympic Games. 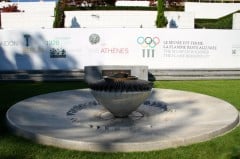 Visitors may run on a real running track and try to beat Olympian times. Many benches and shady spots allow the less energetic to relax and enjoy the views of Lac Léman and the French Savoy Alps.

Also in the park is a permanent Olympic flame. Every day at noon, the Olympic Anthem is played here by a carillon from Barcelona.

Transportation to the Olympic Museum Boat

The Olympic Museum boat and park is a short stroll from the Lausanne-Ouchy boat landing and the Ouchy metro station. The main entrance is next to the fountains on the lakeside road.

Getting to Lausanne is easy by road or public transportation from most parts of Switzerland and even by TGV trains from Paris. Lausanne-Ouchy is also a popular departure point from Lake Geneva pleasure cruises with passenger ferry boat services to Evian and Thonon operating year round from Lausanne.

→The Olympic Museum in Lausanne has reopened and the museum boat is no longer in use.