The Swiss Vapeur Parc on Lake Geneva allows visitors to ride on miniature steam trains inside a large park with miniature buildings and copies of sites in Switzerland. 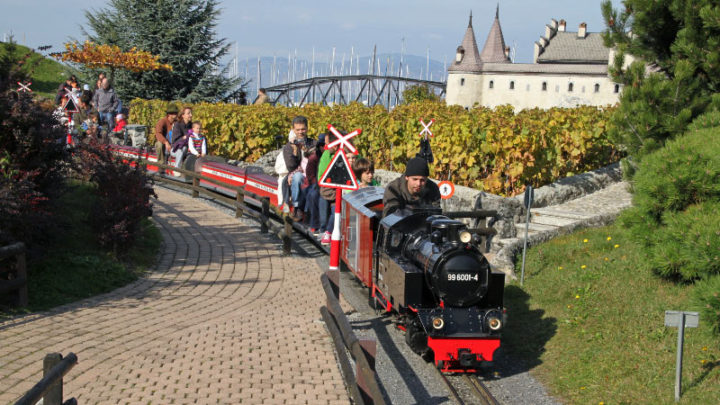 Visitors to the Swiss Vapeur Parc on the shores of Lake Geneva in Le Bouveret enjoy unlimited rides on the park’s small miniature trains. The miniature trains are small scaled reproductions of many famous trains including amongst others Amtrak and Golden Pass trains. Many trains use traditional steam engines. Visitors sit on open wagons but some can be enclosed for rainy days. The miniature trains are hugely popular with children but many older travelers visit without families.  The Swiss Vapeur Parc is a fun day trip from Geneva, Lausanne, Montreux, Bern, and Evian.

Miniature Trains in the Swiss Vapeur Parc on Lake Geneva

The Swiss Vapeur Parc is a large fun park located in Le Bouveret next to the Rhone Rive and Lake Geneva. The park currently has 16 miniature train engines, which are put into service depending on the number of visitors. Up to nine trains operate at any given time. Half of the locomotives are steam engines while the others work with gas or petroleum.

The park currently has 2,000 m of railway track and only 1,200 m of walkways and paths. Trains are obviously the preferred method of transportation here. The trains are guided by 63 signals and 27 switches on a 12-minute circular journey through five tunnels and across 10 bridges and six level crossings. Travelers can embark at different stations with the cog-wheel mountain trains only departing from La Prairie station.

The Swiss Vapeur Parc are full of miniature copies of the originals. The station signs are similar to normal Swiss Railway signs, just smaller. A few Swiss buildings were rebuilt in miniature including Château d’Aigle (the real castle is around 15 minutes drive up the Rhone Valley) and Alpine peak restaurants. The train engines are mostly built to a quarter scale of the real ones.

The miniature trains of the Swiss Vapeur Parc are hugely popular with families and children. However, many visitors are adults traveling without small children. It is very easy to spend more than two hours in the park.

Real miniature railway enthusiasts may operate their own personal single-seater trains on the tracks too but general visitors have to ride the normal ones. Visitors may sail hand-made boats on the lake.

The Swiss Vapeur Parc is generally open from mid-March to November 1. It is open weekdays from 1:30 pm to 6 pm and on weekends from 10 am to 6 pm. During the high season (mid May to mid September) the park is open daily from 10 am to 6 pm. A few times per year night rides are possible with the park operating until close to midnight.

Admission to the Swiss Vapeur Parc is CHF17 for adults and CHF14 for children 6 to 16 and include unlimited rides. Visitors may freely exit and re-enter the park during the day.

All rides are included in the price of the admission tickets. Small meals and snacks are available inside the park at reasonable prices. However, visitors may bring their own food and drink, as picnicking is allowed throughout the park.

See Transportation to Le Bouveret for more information on getting to the Swiss Vapeur Parc – private cars, CGN Lake Geneva pleasure boats, and trains are all pleasant options. Many hiking trails and cycling routes pass by the park.