The Gutenberg Museum in Fribourg (Freiburg) in Switzerland focuses on the development of printing from the medieval monks of the pre-moveable type era to the present digital processes. 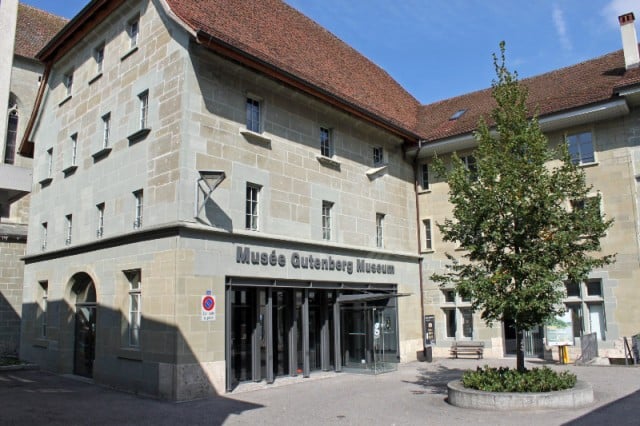 The Musée Gutenberg in Fribourg city (Freiburg) in Switzerland is dedicated to printing and particularly to the Gutenberg inspired technology that were only supplanted by digital processes after half a millennium. The museum explains various aspects of printing from the making of letters to the printing of color photos. Particularly impressive is the number of large printing machines that were mostly in use during the nineteenth and twentieth centuries

The Swiss Museum of the Graphic Industry and Communication, Fribourg

The Musée Suisse des Arts Graphiques et de la Communication / Schweizerisches Museum der graphischen Industrie und der Kommunikation in Fribourg (Freiburg) is commonly referred to by its easier name – the Musée Gutenberg Museum. The museum takes visitors on a journey through the development of printing from the scribes in monasteries in medieval Europe to the most modern digital processes.

The museum dispenses a wealth of information in easy to digest form to visitors of all ages. Many flip cards and interactive displays will be of interest to school children and adults. However, note that information is available in French and German only. Unfortunately, the free audio guide is similarly not available in English.

The collection of the Gutenberg Museum in Fribourg is spread over five floors in a lovely sixteenth-century building in Freiburg city.

The first floor covers the era of printing as a manual process. It not only explains how Gutenberg revolutionized the printing process but also how letters are made, fonts designed, and different colors printed.

The second floor covers the industrial era to the present. The explanations and large machines used to print color photos are particularly impressive – it is hard to imagine that some of the huge wooden machines were still in daily use up to the end of the twentieth century.

The top floor is mostly used for audiovisual presentations but currently also features a small exhibition on Swiss bank notes with a very interesting display on forgery (with samples). Before photocopying and color home printers became common, forging banknotes was a truly specialized job. Historically, forgers have been caught surprisingly fast, often after sending the wife shopping in Zurich with fake notes.

The basement of the museum is filled with an artist studio and a number of large typesetting machines. In an era where PCs are out of date within months, if not weeks, it is amazing to see how some of these complicated machines were produced almost unaltered for nearly a century and some were in daily use for decades.

The ground floor is used for the reception, small museum store, and temporary exhibitions.

Opening Hours and Tickets for the Gutenberg Museum in Fribourg, Switzerland

The Gutenberg Museum in Fribourg (Freiburg) is open Wednesday to Saturday from 11 am to 6 pm (closing at 8 pm on Thursday) and Sunday from 10 am to 5 pm. The museum is open on most public holidays.

Admission to the Gutenberg Museum is CHF10 for adults and CHF6 for children and students over 6 years, and CHF22 for families. Admission includes an audio guide in German or French only. The Swiss Museum Pass is valid.

The Gutenberg Museum is located at Liebfrauenplatz / Place Notre Dame, slightly hidden behind the Espace Jean Tinguely Niki de Saint Phalle and the Notre Dame basilica near the cathedral.