The Musée Romain et Basilique is located amongst the foundations of a first-century Roman basilica in Nyon on Lake Geneva in Switzerland near Genève. 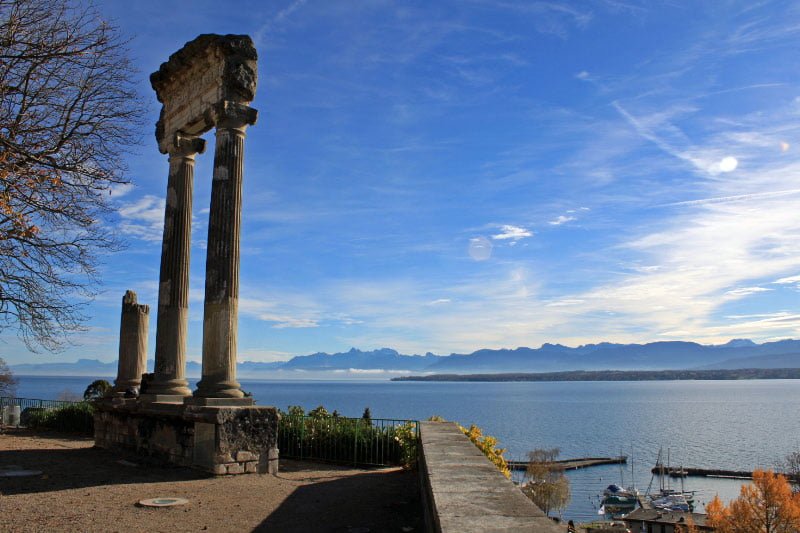 The Roman Museum in Nyon, Switzerland

Nyon’s written history started around BC45 when during the times of Julius Caesar the Roman town Noviodunum, which was an important town in the Roman Colonia Iulia Equestris, was founded on the shores of Lake Geneva. The Roman presence lasted until around AD400 but Nyon remained occupied by humans without interruption.

The Roman Museum in Nyon is located inside the foundations of a first-century Roman basilica. Apart from the exposed foundations, numerous Roman items from the region are on display. These include the mainstays of many Roman museums in Europe such as stones of various functions engraved in Roman letters and numerals, odd bits of statues, remains of mosaics, pots, and jewelry.

Scale models illustrate what the Roman forum complex in Nyon must have looked like while further models illustrate various other aspects of Roman life. A few activity stations for children allow them to explore how a Roman arch is built and how best to load amphorae in a boat.

The museum also gives a broad overview of Roman occupation in what is present-day Switzerland. In Roman times, as in the present, Nyon and nearby Geneva were in completely different administrative regions. Currently, Nyon is in canton Vaud (Waadt) while Geneva is in Genève (Genf).

Above the museum, in an open plaza, concrete boulders show where the original pillars of the Roman building were, while a painting on the neighboring wall gives some indication of what the complex must have looked like.  A small garden is planted with herbs that were used in Roman times. The large statue of Julius Caesar is a copy of a statue in Rome.

Little remains of Nyon’s Roman past. Apart from the Roman museum, a few Roman items can be seen around Nyon. Some decorative stones were used in later buildings but the most visual are the pillars erected above Parc du Bourg-de-Rive. These three pillars (well two and a third pillars) were discovered buried horizontally in old town Nyon and moved to overlook Lake Geneva in 1958. Here, they can easily be seen by travelers arriving by boat or by car from the Geneva direction. These Roman pillars vie with Chateau de Nyon to be the symbol of Nyon.

To the east of Nyon’s old town, the foundation of the Roman amphitheater was discovered in 1996. The ruins are not in a particularly good condition and although covered to prevent further erosion, no immediate plans (or financing) are in place to preserve these Roman ruins completely.

The Roman Museum in Nyon, Rue Maupertius 9, is open Tuesday to Sunday (as well as on holiday Mondays). From November to March, the museum is open from 2 to 5 pm and from April to October from 10 am to 5 pm. The museum is accessible to wheelchair users.

Admission to the Roman Museum is CHF8, which includes admission to the Local History Museum in Nyon Castle and Museum Léman. Admission is free on the first Sunday of each month, during many festivals, as well as to children under 16. The Swiss Museum Pass is accepted.

For More on Nyon See Also:

A Small Romantic Town with Chateau
Some Recommended Tours and Activities in the Lake Geneva Region: