The Château de Morges is a medieval, thirteenth-century fortress and one of the most impressive castles directly on Lake Geneva. The castle houses four surprisingly interesting history museums. 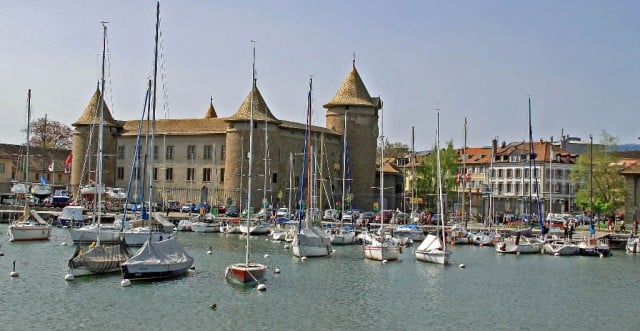 The Château de Morges is one of the best examples of a typical Savoyan square castle with round towers in Switzerland. The fortress kept much of it original medieval appearance and is currently used by four history museums on artillery, the military, police, and tin figures. The castle and museums are fun to explore by adults and families with smaller children.

The Château de Morges Castle was constructed in 1286 by Louis de Savoie, the first ruler of Vaud, and is an excellent example of the typical carré Savoyard – a castle build around a square courtyard with round towers in each corner. This design was popular with Savoyan rulers with Morges castle probably modeled largely on Château d’Yverdon on Lake Neuchatel.

Morges became the seat of the bailiff of Bern from 1537 to the end of the eighteenth century. Morges Castle kept its original floor plan but the upper floors were rebuilt to suit the needs of more modern artillery. At this time the rounded crowns were added to the towers.  The Bernese kept the round towers and did not rebuild the keep square, as was done for example in nearby Rolle or Aigle Castle in the Rhone Valley.

Visitors to the castle can explore much of the building from the cellars to the wall walk and some tower crowns. On a clear day, Morges offers some of the best views of Mt Blanc.

Note how much higher the inner courtyard is than the present street level – the courtyard is at the level of the original draw bridge. The level of Lake Geneva was also lowered during the nineteenth century as a flood control measure.

The first museum visited in Château de Morges is the Swiss Museum of Historical Tin Figures (Musée Suisse de la figurine historique), another example of a surprisingly comprehensive collection on a specialized topic that is often find unexpectedly in provincial museums in Switzerland.

The Military Museum of Vaud in Morges Castle on Lake Geneva

The Military Museum of Vaud (Musée militaire vaudois) explains the military history of the Vaud region. On display is a range of military items including arms, armor, uniforms, ceremonial dress, and uniforms worn by the papal Swiss guards.

The Vaud Revolution against Bernese rule during the Napoleonic era is of course covered in detail with special exhibitions on leading figures. This part of the castle also includes the obligatory torture room with medieval implements of justice.

The Vaud Police Museum in Morges Castle in Switzerland

The Vaud Police Museum (Musée de la gendarmerie vaudois) covers the local police force from its foundation in 1803 to the present. Many uniforms and historic photos are on display but of more interest to many visitors will be the police patrol motorcycles and historical equipment used by the police in investigating crimes.

The Artillery Museum in Morges Castle on Lac Léman

The Artillery Museum (Musée de l’artillerie) in the cellars of the castle is possibly the most interesting museum in Château de Morges. Entry to this museum is down a staircase from the castle courtyard.

Forty cannons are on display from equipment used during the Burgundy Wars (see Château de Grandson for more information on this eventful war and its role in Swiss national history) to the present. Also note the cannons made of leather during the Thirty Years’ War when more mobile artillery was called for.

The museum further has a large number of scale models, technical drawings, and graphs explaining how artillery works and how accuracy improved with newer technology. A folder with full English descriptions is available at the entrance to this museum.

All four museums in Morges Castle are seen on the same admission ticket. The castle and museums are open from March to November from Tuesday to Sunday. Opening hours are on weekdays from 10 am to noon and 1:30 to 5 pm; on weekends open during the afternoon only. During July and August, the castle is open daily from 10 am to 5 pm.

Admission tickets to the Château de Morges with museums are CHF10 for adults and CHF3 for children. The Swiss Museum Pass is accepted.

As medieval castle the museums are not accessible to wheelchair users or strollers.

Morges Castle is on the lake front next to the yacht harbor, an easy walk from either Morges train station or CGN pleasure boat landing. Almost all trains traveling between Geneva and Lausanne stop in Morges – traveling times are around 40 minutes from Geneva Airport, 30 minutes from Genève-Cornavin and from Lausanne as fast as 11 minutes. Ample parking is available nearby.

Morges is a lovely Lac Léman town with a beautiful main street (market day on Saturday) and a long lakeside promenade. The town is always decked out with flowers but is particularly known for its dahlias during summer and the huge free tulip festival in spring. The annual Swiss Classic British Car Meeting is held the first Saturday of October and attracts private cars from all over Switzerland and many parts of Europe.